The greatest differences to be found between the various models are down to the size (given in mah or amp-hour) and voltage type which is either variable or fixed.

There are many different brands of eGO Type Battery available, most of which are good, others are sub-par.

In basic terms, mah rating is the amount of vape time you have available. The rule of thumb is that 650’s will last for around 6 hours, 900’s tend to last for around 9 hours, 1100’s last for 11 hours, and so forth. Nevertheless, that will of course, depend on how much you vape, plus a few other variables must be taken into account such as head resistance. 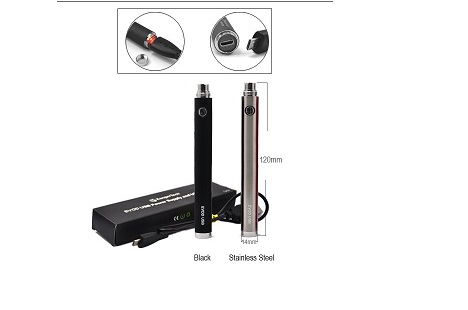 There’s good reason why variable voltages are particularly popular. Having the ability to “dial” your voltage allows you to obtain an optimal vape, variable temperature range, as well as “throat hit” in a customizable fashion when using any head and with any E-Liquid. The variable dial can be compared to a volume knob on a stereo system or radio. If you need more flavor and more vapor, you simply turn up the dial. If you prefer a lighter vape, turn the dial down.

It’s a common occurrence that when comparing the Kanger EVOD Starter Kit to the eGo-C Twist, it’s easier to see the voltage on the Vision Spinner. The Twist has the numbers etched into the metal, whereas, with the Spinner, the numbers are provided on the dial (the chrome colored option is rather difficult to see).

Making a choice as to the resistance of the atomizer (1.8 ohms, 2.4 ohms, or 2.8 ohms) and then pairing this together with the right battery voltage (generally between 3 and 5 volts) will allow you to tailor the amount of vapor produced. By changing the battery voltage, even in minor increments, can and will make a noticeable difference in the flavor, the temperature, and the quantity of vapor.

Honestly though most of the suffixes: -C, -T, etc. are merely down to branding with respect to a variety of accessory bundles that can be purchased. As by way of example, the eGo-C arrives with a cartomizer, while the eGo-T comes with a tank system.

The prefixes –ytech —-2 cigs– just an example, allow the vendors to provide their own branding, albeit they are not necessarily the manufacturers of the product range. The whole range of these devices are manufactured in China, and as a matter of fact, many of them are produced side-by-side within the same factory premises. You will tend to find numerous different opinions about which product is best, but really, it comes down to individual taste. What to you is near-perfect may to someone else be somewhat sub-par.

The various batteries are identical in both forms and with respect to intended function. As previously mentioned, it’s the battery capacity (650/900/1100 mah) which determines the batteries duration between charges. The rule of thumb being that you’ll obtain about 1 hour/100 mah.

Other than this, it’s wise to shop depending on price, on customer service, and on the consistency of the quality of the product. Many “smokers” are more than happy with a non-VV eGo device, and in all probability, many people start out with this choice. All the same, in the never-ending quest for a superior vaping experience, VV is considered by many to be a significant upgrade over non-VV. Your ultimate choice will depend on budget, your requirement with respect to battery life, and also the number of facilities you wish your device to possess – the more facilities obviously means the more precisely you’re able to set the device.

Arguably (and people will always argue about this), Joyetech, ego as well as Kanger (manufacturers of EVOD) would be considered the top-line brands with respect to eGo devices. Many e-cigarette users would also include Smoktech in this line-up. As you might expect, the “no-name” generic range can vary immensely with regards to overall quality. However, they might represent such a good deal that they then become a worthy investment risk.

If you are intent on investing in your first eGo starter kits, it’s recommended to buy from a reliable and cheap online vape stores like Cape vape with the best possible rate plus you will there 120ML bigfindeal ejuice by eSnaxx by only $24.50. In fact, it’s wise to purchase the two as you will always require a back-up while the other battery is re-charging.